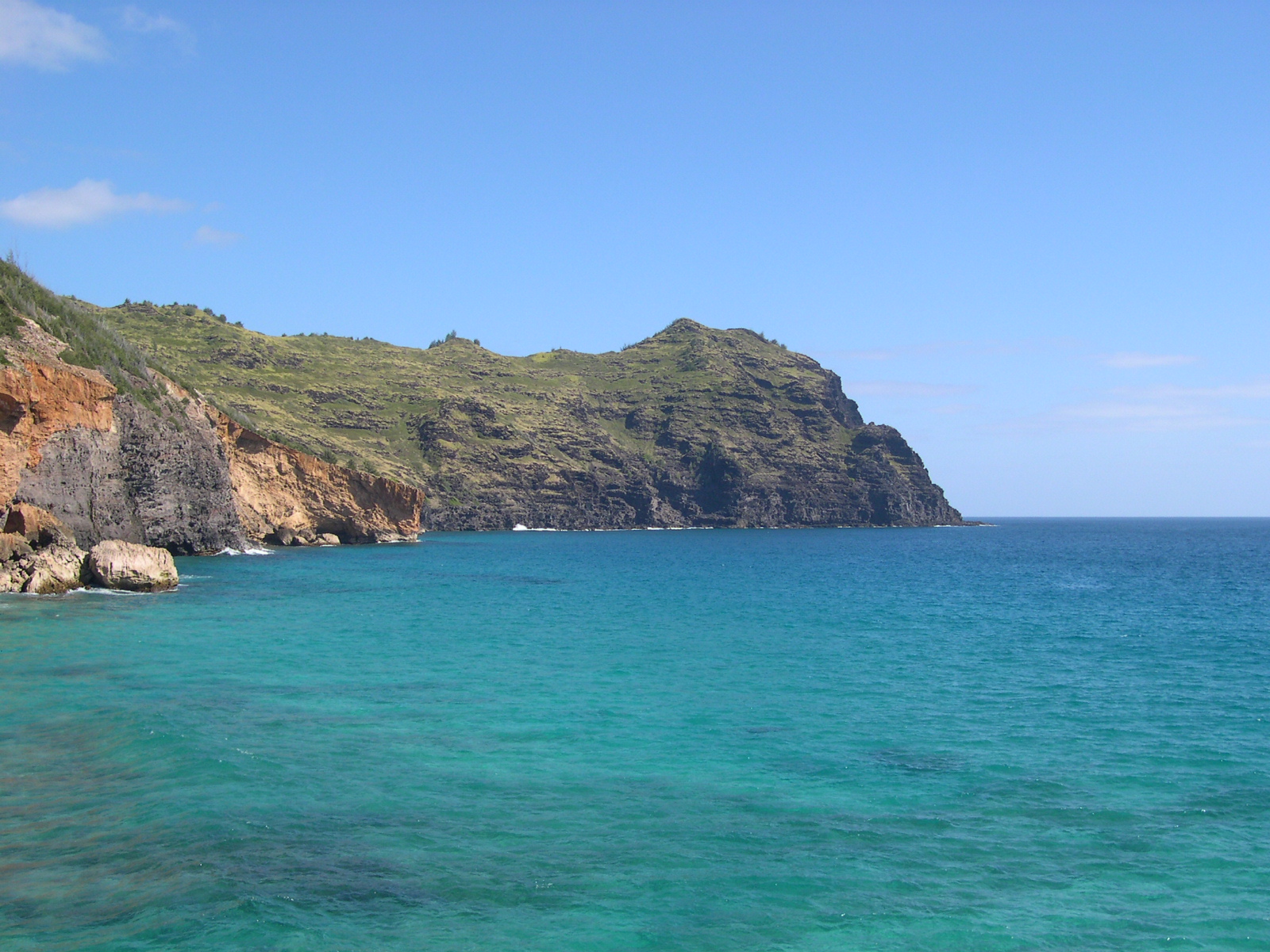 Humpback whales are very large animals. Adults typically range in size from 35 to 48 feet, and weigh in at about one ton per foot. Their scientific name is Megaptera noveangliae. This means “giant wings”, which refers to their large front flippers that can reach a length of 15 feet– about one-third of the animal’s entire body length. Humpback whales are found in all of the world’s oceans, although they generally prefer near shore and near-island habitats for both feeding and breeding. The current world population for the species is estimated to be between 5,000 and 7,500 individuals, and can be divided into groups based on the regions in which they live. One group found in the North Pacific in the waters off Alaska is estimated to consist of about 2,000 individuals. A large percentage of this population are the ones with which you are probably most familiar, as they migrate to the main Hawaiian islands during the winter months, November through May, each year. The round-trip distance they travel during this annual migration is approximately 6,000 miles, one of the longest migration distances of any animal species. During their stay in Hawaii, they do not feed, but rely upon energy stored in their blubber. Instead of feeding, the whales devote most of their time to mating and bearing their calves. (Fig. 4, Migration route of North Pacific Humpback Population)

Humpback whales become reproductively mature when they are between 4 and 8 years of age. As mentioned, they mate during their winter migration to warmer waters, and eleven to twelve months later, upon their return to winter breeding grounds, the mother gives birth to a single calf. At birth, calves are approximately 13 feet long and weigh two tons. This changes quickly however, as the mother must feed her newborn about 100 pounds of milk each day for a period of five to seven months until it is weaned. After weaning, the calf has doubled its length and has increased its weight five times, attaining a size of about 27 feet and 10 tons. Usually, a female humpback will bear one calf every two or three years. The maximum rate of reproduction for the species is one calf per year, but this is seldom practiced as it puts quite a strain on the mother whale. Scientists estimate the average life span of humpbacks in the wild to be between 30 and 40 years, although no one knows for certain.

While visiting the islands, humpbacks have become renowned for their various acrobatic displays. In fact, the common name “humpback” refers to the high arch of their backs when they dive. One of the humpback’s more spectacular behaviors is the breach. Breaching is a true leap where a whale generates enough upward force with its powerful flukes to lift approximately two-thirds of its body out of the water. A breach may also involve a twisting motion, when the whale twists its body sideways as it reaches the height of the breach. Researchers are not certain why whales breach, but believe that it may be related to courtship or play activity. Some behaviors such as headlunging, which occurs when one whale thrusts its head forcefully towards another whale in a threatening manner, are believed to be aggressive behaviors meant to ward off competitors. Males display this behavior most often to gain access to females. Many other behaviors including fluke slaps, flipper slaps, and headslaps have also been characterized, although their apparent functions are unknown.

This information is from www.earthtrust.org  if you would like more information.

We're here to help you!